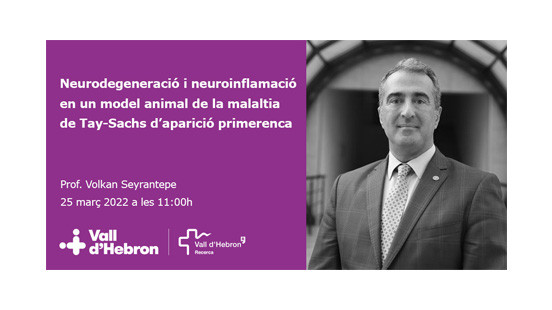 The GM2 gangliosidosis are rare, often lethal, autosomal recessive disorders for which no treatment is currently available. These disorders result from GM2 ganglioside accumulation due to deficient â-hexosaminidase A (HEX A) activity. Products of three genes, HEXA, HEXB, and GM2A, are required for HEX A activity, and mutations in HEXA cause Tay-Sachs disease, mutations in HEXB cause Sandhoff disease, and mutations in GM2A are extremely rare. In humans, Hex A is essential for GM2 ganglioside degradation, whereas in mice, a sialidase enzyme provides a bypass to HEX A, allowing breakdown of GM2 ganglioside by HEX B. Our group has developed mice (Hexa-/-Neu3-/-) with a Tay-Sachs disease phenotype by combining HEX A and neuraminidase 3 deficiency, providing a model in which potential therapies for the human Tay-Sachs disease can be tested. Hexa-/-Neu3-/- mice were healthy at birth but survived until 5 months of age. Slow movement, ataxia and tremor were among the neurological abnormalities observed in those mice. Behavioral analysis including passive-avoidance, rotarod and water maize revealed age-dependent motor coordination impairment and memory deficit which indicated progressive neurodegeneration in Hexa-/-Neu3-/-. Massive accumulation of GM2 as well as GM3, LacCer and GA2 gangliosides in brain tissue from Hexa-/-Neu3-/- mice. Electron and light microscopy analyses of the brain cortex showed typical lysosomal storage pathology similar to that of Tay-Sachs patients. We also demonstrated significantly higher expression levels of pro-apoptotic genes, particularly Tnfá, Tnfrsf1a and Casp4 in cerebellum. There was also a significant decrease in anti-apoptotic gene expression including Naip1. Immunohistochemical analysis showed microglial and astroglial activation in cortex and cerebellum which in turn release inflammatory cytokines and chemokines contributing to neuronal death. We suggest that antagonist that target this inflammation may have the potential to provide significant benefit, particularly when provided in combination with gene therapy. We currently explore therapeutic effectiveness of different approaches to normalize the pathological hallmarks of the disease of Hexa-/-Neu3-/- mice in the brain. Our studies may have strong implications for effective, non-invasive therapies of Tay-Sachs, especially with respect to neurological manifestations of the disease. Our studies will also provide a basis for the planning of pre-clinical and clinical trials of several therapies.

Prof. Seyrantepe has extensive experience in medical genetics and molecular biology, with specific training and expertise in lysosome biology and generation of transgenic mouse lines. His research includes the biological role of sialidases in complex cellular events. After completing you postdoctoral training at the University of Montreal, Sainte-Justine Hospital Research Center, Department of Medical Genetics, he returned to Turkey in December 2009 and established his fully equipped research laboratory and main animal facility at the Institute of Izmir Technology. , Department of Molecular Biology and Genetics. As principal investigator, professor, senior scientist and co-investigator in nationally and internationally funded grants (TUBITAK, EMBO, Marie Curie, German BMBF), he laid the groundwork for several investigations by generating mouse models to better understand the pathobiology in sialidosis , galactosialidosis and Tay-Sachs disease.