Webinar VHIR- Dr. Joan Seoane "LIF as a regulator of the innate immune response to antigens" 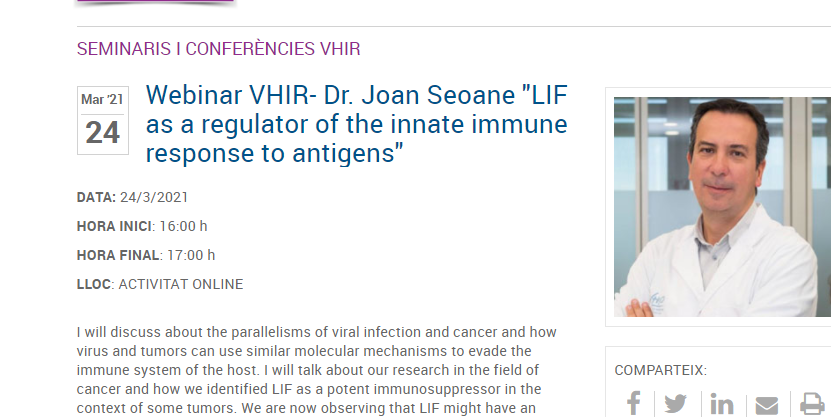 I will discuss about the parallelisms of viral infection and cancer and how virus and tumors can use similar molecular mechanisms to evade the immune system of the host. I will talk about our research in the field of cancer and how we identified LIF as a potent immunosuppressor in the context of some tumors. We are now observing that LIF might have an important role in viral infections.

Joan obtained his PhD in Biochemistry and Molecular Biology from the University of Barcelona (1998). Previously, in 1993, he obtained his BSc degree in Chemistry. He worked at the Memorial Sloan-Kettering Cancer Center (MSKCC) in New York from 1998 till 2003.

He is nowadays Director of the Preclinical and Translational Research co-Program at (VHIO).

His main objective is to understand the molecular mechanisms involved in the initiation and progression of cancer in order to design rational, specific and successful therapeutic approaches. Specifically, his work is focused in the study of brain tumors aiming at improving the treatment of this dismal disease.

• Secretary General of the European Association for Cancer Research (EACR) since 2016, and Board Member since 2008.

• Member of the European Academy of Cancer Sciences (EACS) since 2017